View source
watch 02:53
GTA: The Criminal Enterprises - The Loop
Do you like this video?
Play Sound
Spoiler Alert
This article/section contains spoilers for in-game surprises, secrets, or storyline details, such as the end of the game. Please continue with caution if you are new to Sky: Children of the Light.

Winged Light (also sometimes called Stars[1] or just Wings) are used to upgrade your cape and give you wing power.

There are two sources of Winged Light: Children of Light and Wing Buffs.

Children of Light are the most common source of Winged Light (and the only source available to new players). They are bright golden white glowing characters who look like short Sky kids without capes.

Please refer to the Children of Light page for all their specific locations across the realms.

Wing Buffs can only be collected once the player has traveled through all the realms and can then unlock them through Spirit Friendship Trees.

Please refer to the Wing Buffs page of more information.

Gaining Winged Light increases the number of wedges you have to fly. At the start of the game, you obtain your first wedge during the Isle of Dawn tutorial by collecting your first Child of Light and forming your cape.

Each wedge (at the top of screen) means one flap of your "wings" when you fly, which will grant you the energy to fly further and higher. If you click the wedge icon at the top of your screen, it will show you how much Winged Light you have found so far and how many more you need to level up (it will also open the Expression Menu).

When you have collected enough Winged Light to level up, the wedge icon will have a red dot. Click on it to obtain another wedge. After the level up animation your energy is refilled so it can be an opportunity to fly further.

Information on your wedges is also displayed on the back of your cape (see Cape Energy). Your cape has one glowing star (or outline around a glowing star) for each available wedge of cape energy. The stars/outlines are dark if you have used up that wedge's energy and need to recharge.

The following table shows the number of Winged Light necessary to increase your wedges / cape energy.

When you run out of flying power there are several ways to recharge: 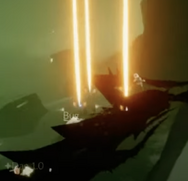 When a player loses Winged Light, it will fly away from the player and appear as orange wings with a white light column. The player can try to pick them up again, but they will break after 14 seconds, or immediately in final section of the Eye of Eden (Spoilers!), and the player will have lost their light and ability to fly, so it is often very hard to reach them. Other players may help with picking up the lost Winged Light before time runs out.

If your lost winged light that was Wing Buff instead of the Children of Light, you can only re-obtain it when you're reborn.

In addition to first visits by Traveling Spirits, the maximum possible winged light increases whenever the latest season adds new Children of Light, or whenever a new tier 2 Wing Buff is added (e.g., associated with a new Tier 2 Cape).