Protect your light and find the source of Ancient Power

Originally called Rain (and still often referred to as such), it was changed to Weeping Forest, then shortened to Forest, and, finally, renamed to Hidden Forest in June 2019. Some players call this Realm, "The Rainforest" because of its wet, rainy and deep green landscape.

This is another Realm that has undergone many changes. Dark Material (originally known as Darkstone, and later Corruption) was added in June along with replacement of some candle locations. Burning it completely with a candle will increase a player’s candle count. An eagle’s nest and wishing well were also added, and then Dark Material was changed into Darkness Plants.

Standing in the rain can drain a player’s light power, which can be restored or recharged by standing near a lantern post or another player, or hugging another player for a quick recharge. These recharge methods can be used throughout the game.

Hidden Forest, like other Realms, is broken up into sections. While almost none of these sections have official names, there are unique things about each of them that can make them easily identifiable.

Locations of all available Children of Light (Winged Light) can be found on the Winged Light page.

The Forest proper has one treehouse with a Winged Light (Child of light / See Forest WL 1). This is the first area where the player finds large dark plants to burn. These dark plants give wax (Light) that accumulates in the player's white candle.

Once you go through the first gate, you are introduced to the rain. Exposure to rain drains you of cape power and can extinguish your light. Note that water on the ground is harmless, only the rain and polluted water in Golden Wasteland will drain your light.

There is one Ancestor Spirit in this first rainy area. The Quest to free him takes you through the gate into the next rainy area. In the next area, you would be able to find one Child of light (See Forest WL 2) before moving on to the next part of the Forest. 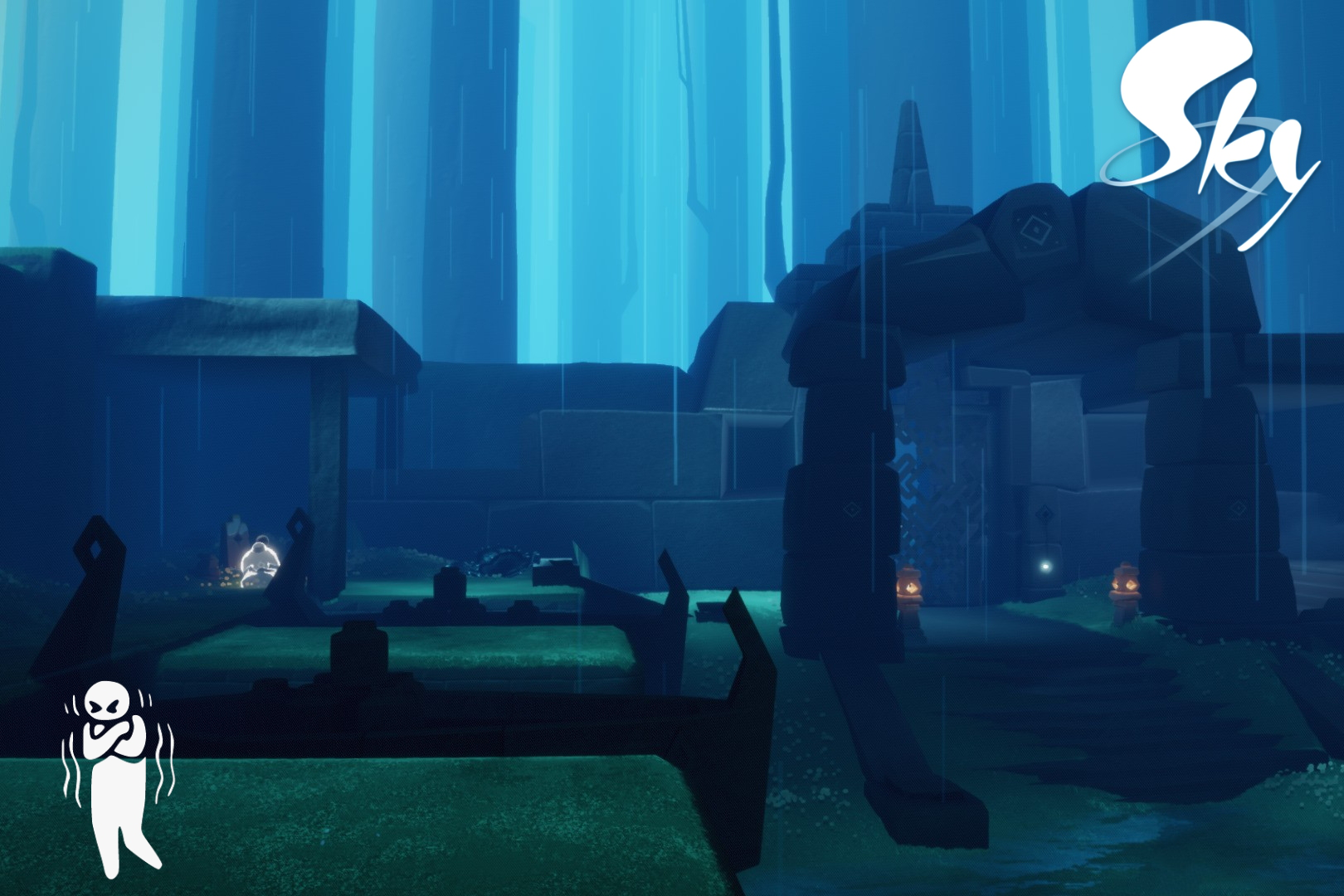 The first Ancestor Spirit can be found the far left corner of the first courtyard you enter. 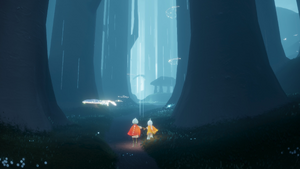 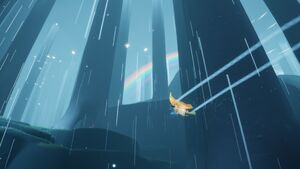 Occasionally, a rainbow appears in this area.

A transition takes you to an open area that is bisected by a river. Trees, treehouses, dark plants, and white fungus are to be found here. The white fungus is a relatively new addition, and actually charges the player and helps you to climb higher and reach the treehouses above. There is also a hidden cave housing a Child of Light.

To the immediate right of the entrance into this area there is a cave opening blocked by a Spirit Gate (aka Constellation Gate). This area will be described later.

There are four Winged Light (Children of light) in this area, and three Ancestor Spirits. 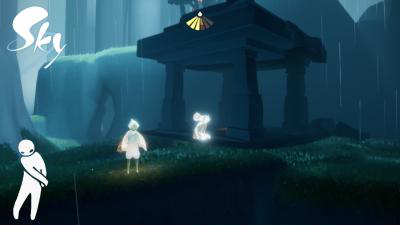 From the start of the area, follow the wall to your left until you come to a temple with the Ancestor Spirit. 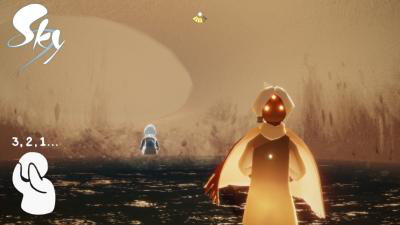 Return to the bridge. Just before the bridge in the river bank on the right there is a small tunnel, normally hidden by a dark plant. Careful, the Ancestor Spirit is protected by Dark Crabs that will attack you. To protect yourself, release a deep call. An additional "dress" cosmetic has been added to this Spirit 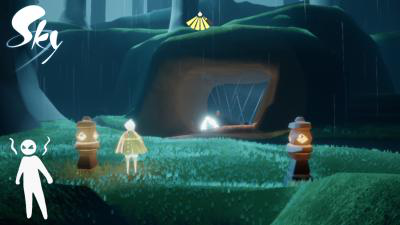 Return to the bridge. At one end of the the bridge is a tunnel entrance with the next Ancestor Spirit.

In this area you find your first "enemies" of the game — creatures that can harm you.

Dark Crabs (also known as Dark Creature Crabs or simply Crabs) are the first living Dark Creatures you encounter. Be careful of them, as they will knock you down and can take your Winged Light if they hit you enough. If they knock you down during a Spirit Quest, they will disrupt the quest and you may have to start the quest over if you are not able to recover quickly enough.

A Deep Call (press and hold on your character until you call automatically) will often render the Dark Crabs senseless for a few moments. If you approach a Dark Crab which has been knocked over, an option will also appear to be able to pick up the Dark Crab. So far, there is no real function in being able to do this. Dark Crabs also appear later in Wasteland (in large numbers) and in the final Realm.

This is the area that is blocked by the Constellation Gate. It is an area the connects the River area and Bridge area, skipping everything in between. It can be useful as a drier shortcut through the level. It can be accessed at either end, though accessing it from the River and Trees area is a bit easier. It requires all 8 Forest Ancestor Spirits to enter.

Two Children of Light (Winged Light) can be found in this area. There are also two hollow trees in this area. One houses a table that seats 8 players and was part of the Season of Belonging story. The the other houses a two-person trap-door that leads to the Underground Cavern.

The 16 November 2019 (Season of Belonging) update to the game introduced a brand new area accessible from the Sunny Forest area of the Forest. To enter, fly down from the hill where Winged Light 7 is found, across the path into a hollow tree. Inside the tree there is a layer of stone blocking a hole in the ground. To enter, two players must use the Pouty Porter's Expression simultaneously. In the next area, there are pots of butterflies blocked by darkness. To enter the caverns ahead players can either release a deep call and fly partway up using butterflies, or climb the glowing fungi.

Four Children of Light (Winged Light) can be found in the Underground Cavern.

Tree Tunnels and a Tree House

The next two areas are actually connected, there is no white-out transition that separates them, but they are also distinct in the memories of long-time beta testers. This area was expanded to nearly double the size it used to be, and the division of the two areas is no longer as clear as it once was.

This first part of the area has two Ancestor Spirits and two Children of Light. 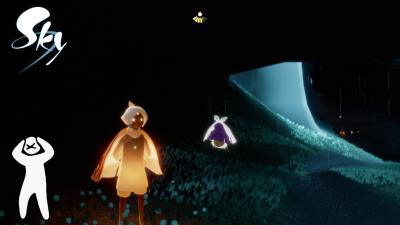 After you have entered this area, the Ancestor Spirit is to the right under a rock. 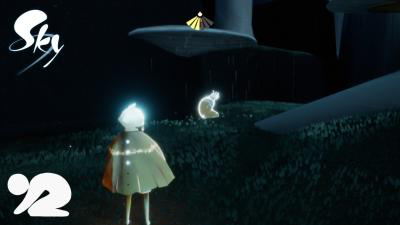 Go back to the beginning of the big pipe. To the left you see a tree stump with non-glowing fungi on it. The Ancestor Spirit is to the left of it.

The Tree House of the last area overlooks the final area, the Broken Bridge and the Whale Bones. This is where you'll find two trapped Mantas to free, and Jellyfish to release. There are also two Ancestor Spirits here. Once you have repaired the entire bridge and the Jellyfish appear, the rain will stop both in vicinity of the Broken Bridge as well as the tunnel area. This is helpful when trying to collect the large multiplayer plant atop the hill. 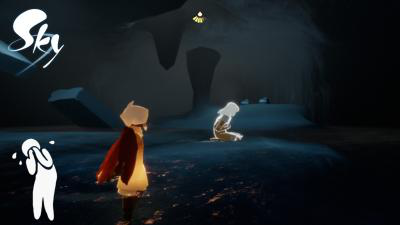 Find the four towers connected by a (broken) bridge. From the 3 of these towers go straight to the right, into a cave under a tree root and you will find the Ancestor Spirit. 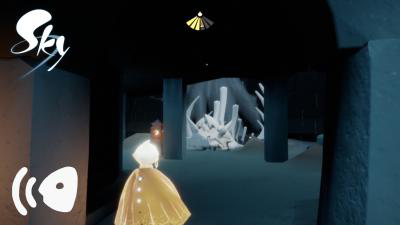 Return to the bridge. From the second tower, go straight left to a building that doesn't have open sides. Behind it, you will find a big skeleton overgrown with dark plants. Burn them all to receive the call. If anyone else discovers the call while you are in the area, you will also receive it.

These are the numbers of Candles (C), Hearts (H) and Ascended Candles (AC) required to complete the constellation

Tier 2 Capes does not count toward constellation completion

The Season of Assembly update added a new area to the Hidden Forest realm called the Treehouse, which served as the main hub for the season as you go on quests to build a cozy treehouse.

It also added several treehouses and camps across the realm which comes with access to the Treehouse upon completion of respective quests. The quickest way to enter the Treehouse from spawn point is through a gate to the right side in the cloud tunnel, which requires one Valley of Triumph spirit to open.

There are two Winged Lights that came with the new area.

Once you've ascended the Jellyfish to the top, you enter the temple area. There are a few patches of Dark Plants here, but no Ancestor Spirits. Keep a watch on the spaces under the two side platforms, though, since Ancestor Spirits and Seasonal Items have shown up there in the past.

To the right of the central shrine is a grand Dark Plant that rises several steps above the works. This Plant has a couple of major branches to climb. While you're burning down one branch, the other will regrow, so it will take two players working together to completely burn it out. Once an entire branch is burned, one player may guard the bottom of the plant while another finishes the other side. Further, if any player lacks flight energy, you can support them by releasing deep calls. This will both recharge the other player and create protection from the Dark Crabs which may appear in the water.

Light the rotating panel to raise the Elder Stone. Lighting up the 3 candles of the Elder Stone will bring up a meditating circle where you can sit to view the final spiritual scene and open the 2 large doors leading to the Forest Clearing.

This is a bright place with many birds, offering a space to relax and a few extra benches to converse with other players. Besides 3-4 random Dark Plants, there is a Child of Light to the left as you enter, up on a ledge.

When finished here, use the Jellyfish (or the butterflies via deep call) and your own flight power to fly up and out through the cloud tunnel, completing the Hidden Forest and flying up to the next realm (Valley of Triumph).

While most of the world events and special places have been removed from the game, a few still remain, including two in this Realm. 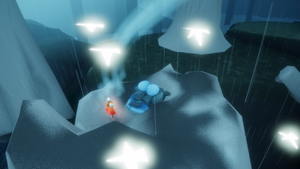 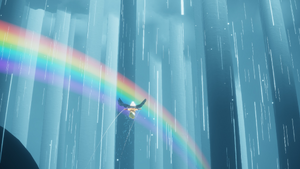 One is the Eagle's Nest with a literal "Easter egg" in it. From the last tower of the broken bridge, instead of jumping on Jellyfish, fly to the right to a big tree stump that has glowing mushrooms growing on it. The nest is on top.

The other special place is the Rainbow. The Rainbow still appears at, 5:00 AM/PM (both) Pacific Time (aka. 8:00AM/PM EST), and remains for 30 minutes and can be found above the gate to Sunny Forest, in the second area above the little temple with a message shrine to the right.

Sky Children of the Light New Walkthrough Hidden Forest Spirits and Winged Light
This video does not include the new Underground Caverns area of Hidden Forest.

Sky- Children of the Light- Emotes, Emote Upgrades, and Cosmetics in Hidden Forest