Climb the Vault, its wisdom awaits

Originally called Night, this level is also referred to as the "Library" or the "Tower," due to its resemblance to the Tower level in TGC’s game, Journey. In June 2019, the name became Vault of Knowledge, or simply the Vault.

This is the first Realm in the game that requires four people to open doors in order to collect an Expression. It's also the only area besides the villages area of Prairie where a specific Expression is required in order to unlock another Expression, and it happens frequently here.

The vault has seven floors or levels. Just before ascending to a higher floor, you are shown a constellation and it is speculated that each floor represents a Realm of the game.

Location of all available Children of Light can be found on the Winged Light page.

Unlike the other Realms (excluding Isle of Dawn), this area is missing a bonfire as well a Closet to change cosmetics, though it does still contain a bench to chat with other players and statues of the spirits released in current Realm.

This level is represented by the Isle constellation and has dunes of sand here and there. 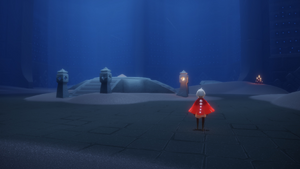 Elevator to the top 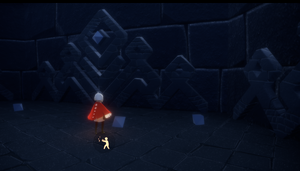 There is one Child of Light in this level. This level contains the Social Space and the Archives.

This level has a "lighting the lanterns" puzzle to complete before reaching the next floor. 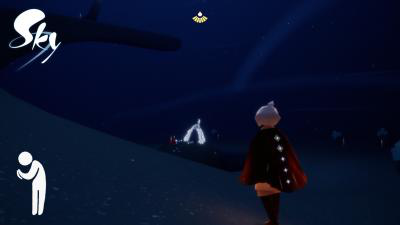 Pray: To the right-hand side of the circular room on this floor there is a door that can only be opened by four players with the Telekinesis Expression. This specific Expression is not found until the second level of the Vault, which means new players are unable to collect it immediately. Furthermore, there is no way of returning to a previous floor upon ascending. Once you have opened the door, follow the tunnel and find the Ancestor Spirit sitting in the middle of a cave.

The 16 November 2019 update to the game introduced another brand new area accessible from this first level of Vault. To enter, open the two player door to the direct right of spawn. Along the path is a constellation barrier requiring one Expression from the Vault of Knowledge. Two new Children of Light were added in this new area. However, it has since undergone a lot of changes in both appearance as well as the locations of the Children of Light.

There is a secret area accessible from the first level of Vault of Knowledge. Please see Secret Area (Spoiler Alert!) for more information on accessing this secret area. Note: please avoid this link if you wish to find the area yourself.

This area was added in July 2021, for the Season of the Little Prince. The entrance to the area is through a hole in the wall adjacent to the ladder where one Winged Light sits in the beginning of Vault. Upon entering the Vault, fly up to the left-hand wall where the ladder stand. The doorway is protected by a Spirit Gate, requiring one (1) Spirit from Vault to enter.

This level is represented by the Prairie constellation. 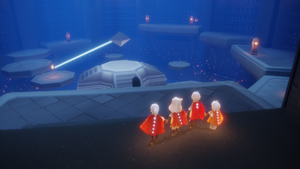 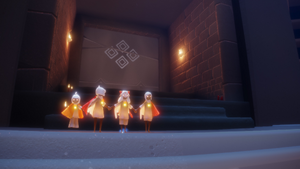 This is where you find the Spirit with the Telekinesis Expression needed to access the 4-player area on the bottom floor. To collect it, four players must collaborate to open the large door off to one side. However, this door does not require any Expressions to open. You will only need to approach it, and press the "grab" icon once it appears. There are no Children of Light on this level. The floor, made of stars, will recharge your cape when touched and cannot be penetrated.

This level is fairly simple, with another "lighting the lanterns" puzzle to complete before reaching the next floor. 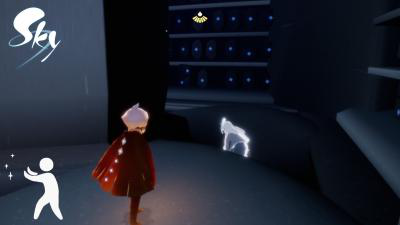 Telekinesis: In the room behind the 4-player gate, the Expression can be collected in the far left corner behind a column.

This level is represented by the Forest constellation, and has been expanded to contain stone ramps and crystal-like trees. One Ancestor Spirit and one Child of Light are also found here. To reach the next floor, the player will first have to light the lanterns on the circling stone platforms. This will cause further, floating, lanterns to appear around the original dais. Once these too are lit, the player can sit at the dais to ascend to the next floor. 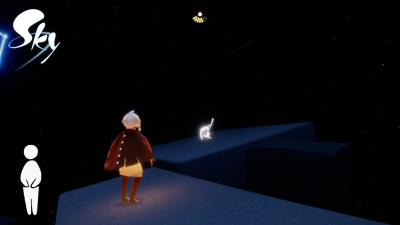 Hands Folded Stance: Once you reach this floor, look around you until you find the Ancestor Spirit sitting on a stone platform. You will have to follow it up some more platforms. The orange starlight, emitted from platforms at the bottom, can recharge your cape if you run out of power. As at the previous floor, landing on the floor proper will also recharge you. Reliving the memory will also cause a crystal tree to grow next to the spirit.

The fourth level is represented by the Valley constellation. The stone buildings and mini coliseum resemble those found in the races. This area contains waterfalls of light and stone islands.

A very high platform containing some red candles has remained here after the 2019 Season of Lightseekers event, and can be found by flying directly upwards from the Manta Call platform. You may need to hold hands with a player or grow your wing strength if you can't get high enough.

There are two Winged Light in this level, as well as two Ancestor Spirits. 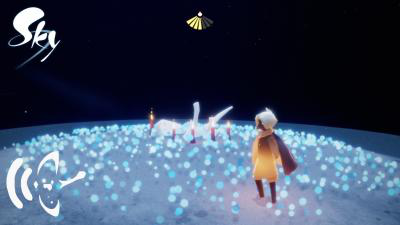 Find the highest visible platform without a building on it (it consists of two overlapping circles). Simply press the Manta Call button when it appears after lighting the red candles to unlock this Expression. 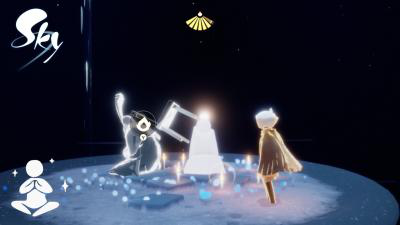 This Ancestor Spirit requires the Pray Expression (found on the First Floor) to be collected. The Pray Expression in turn is only accessible through a 4-player door requiring the Telekinesis Expression. Thus, Levitate can only be obtained on a players second run-through of the Vault of Knowledge, if the 4-player gate wasn't opened by four others. Find two islands, one higher and one lower, connected by spiraling stepping stones. The Ancestor Spirit is activated on the lower island and needs to be followed to the higher one. There, Pray until the stone in the center fills up completely with white. Players who have not collected the Pray Expression will be able to follow the Spirit's impressions to the top, though not actually activate the final step. Note: someone else with the Pray Expression can activate the Spirit for another player if they Pray in their stead.

The fifth level is represented by the Wasteland constellation, and has a few skeletons floating in the sky. To reach the next floor, players will need to fly to the Large Cosmic Manta which will approach from the Prairie Constellation in the sky. On the back of the Cosmic Manta players will find lanterns to light – these activate the dais at the center of the floor. Cosmic Mantas will start to circulate the platform, which players can ride to reach the Summit.

One Winged Light is available in this area.

This is the floor where you meet the Elder. One Winged Light and a Meditation Shrine are also found here.

This is the final transition area of the game, with portals leading either Home or into the Eye of Eden. The constellation barrier blocking your entry to Eden (Spoiler Warning!) requires 20 Winged Light to pass through. However, it is recommended to acquire significantly more than this before entering Eden.

These are the numbers of Candles (C), Hearts (H) and Ascended Candles (AC) required to complete the constellation

Tier 2 Capes does not count toward constellation completion